In the framework of the Ursula Hirschmann Lecture Series, this hybrid event is jointly organised with the Robert Schuman Centre for Advanced Studies. 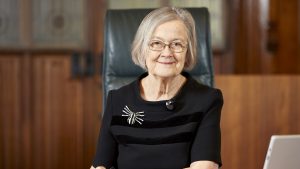 Brenda Hale, Baroness Hale of Richmond, retired in January 2020 as President of the Supreme Court of the United Kingdom, the apex court for England, Wales, Scotland and Northern Ireland. She was educated at Richmond High School for Girls, in North Yorkshire, and Girton College, Cambridge, where she is now Visitor, and called to the Bar by Gray’s Inn. After graduating, she spent 18 years teaching, researching and writing in Law at the University of Manchester, also practising for a while at the Manchester Bar. She then became a member of the Law Commission, a statutory body which makes proposals for the reform of the Law. Her proudest achievement there was the Children Act 1989. In 1994, she was appointed a High Court Judge, the first to have made a career as an academic and public servant rather than as a top barrister. In 1999 she was promoted to the Court of Appeal of England and Wales and in 2004 became a Lord of Appeal in Ordinary in the House of Lords, the first and sadly the only woman ever to hold that office. In 2009 the ‘Law Lords’ were transformed into Justices of the newly established Supreme Court of the United Kingdom. She became its Deputy President in 2013 and President in 2017. On 24 September 2019, she announced the unanimous decision of the court in the case of R (Miller) v The Prime Minister [2019] UKSC 41.

The speaker will be present online and the event will be hybrid. Please register on Events to receive the ZOOM link as, due to the high number of registrations the room has reached its capacity. For any further info please contact Francesca Parenti.