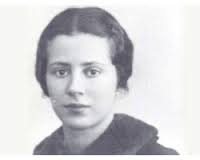 The Ursula Hirschmann lecture series was established within the Gender Studies Programme (by its founding director, Luisa Passerini) in the Robert Schuman Centre for Advanced Studies at the European University Institute in 2001. Named after Ursula Hirschmann, who created the group ‘Femmes pour l’Europe’ in Brussels in 1975 as a space to reflect on, critique and contribute to the contemporary debate on the construction of Europe, the series is a reminder of this engagement, and seeks to stimulate research and thinking which links ideas about Europe and the study of gender.