From this site you will be able to access a range of gender-related activities now active at the EUI, including the syllabus and course materials for the seminar “Gender and Sexuality”, information on the annual Ursula Hirschmann Lecture on Women and Gender, and all gender-related events (lectures, conferences, workshops and round tables) currently happening at the EUI. 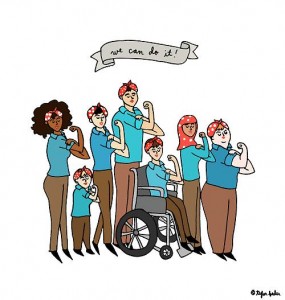 It is precisely the dual nature of gender as a category whose political and scholarly dimensions are not easily disengaged from one another that may well explain why this field finds itself constantly obliged to re-mount the argument for itself; to re-demonstrate gender’s political and analytic force with each new generation. For there is an ever-present suspicion on the part of non-feminists that scholarship on women, gender and sexuality must be ‘biased’ (as if such a thing as purely neutral scholarship ever existed). This is matched by a concomitant temptation on the part of feminist scholars to imagine that feminism has at last won the crucial battles; that the need for gender has, happily, withered away.

The EUI’s fluctuating history as a home for gender studies is thus not solely a product of the high turnover in its personnel. It is also linked to the hesitation that scholars feel when faced with an analytic category whose roots in present-day political struggles seem all too evident.

THE HISTORY OF GENDER STUDIES AT THE EUI

Gender studies at the EUI saw a major turning point in October 2000, when Yves Mény, then Director of the Robert Schuman Centre, sponsored the launch of the Gender Studies Programme (GSP). This creation had been prepared and anticipated for more than a decade by a series of initiatives, from the inclusion of gender in EUI seminar in Intellectual history thought by Gisela Bock and Olwen Hufton, to the enrichment of the library with a section on gender studies; from the constitution of a LGBTIQ Working Group (since academic year 2017-2018), to the organisation of many lectures and conferences on gender-related issues. In particular, an important antecedent of the GSP was the 1994/95 European Forum on “Gender and The Use of Time”, directed by Olwen Hufton and Yota Kravaritou. In 2001 Luisa Passerini, as the first Director of the GSP, initiated a series of lectures in the name of Ursula Hirschmann, which are currently organised by the Chair in the History of Gender and Sexuality in conjunction with the Robert Schuman Centre.

Over the years, both the academic and the administrative bodies of the EUI, have debated policy issues that have gender, sexuality and identity at their core. Firstly, there was a  felt to need to consider gender balance at various levels of the institution and to look at gender mainstreaming as one of the principal concepts to reflect upon. Secondly, it was felt that the Institute should follow the example of most national universities in the Europe and create a formalised code on personal harassment. This led to the inclusion of special provisions in the Staff Regulation, as well to the adoption of the EUI Policy on Harassment Prevention and Education and the subsequent creation of the Harassment Committee in 2014.

Since the spring of 2013, the EUI has seen a renewed wave of activity around issues of gender and sexuality, as researchers, post-docs and faculty have collaborated in organizing a host of initiatives: round tables, workshops and seminars on occupational segregation or on glass ceilings in academia, on struggles for wage parity and against discrimination based on sexuality or sexual orientation, on the impact that negative stereotyping around race, gender and sexuality has on the daily lives of those who bear the burden of these negative ideas and images.

Finally, in the fall of 2014, Laura Downs (Department of History and Civilisation) and Ruth Rubio (Department of Law) established the Institute’s first cross-disciplinary seminar on ‘Gender and Sexuality Across the Disciplines’. The seminar is offered every year, in hopes of broadening the range of analytic tools with which our researchers are equipped, and of giving studies of gender and sexuality a more permanent institutional foothold at the EUI. But it is in the long list of PhD theses concerned with gender and sexuality that are defended each year at the EUI that we find the strongest testimony to the ongoing, and indeed growing interest of EUI researchers in a broad range of gender-related issues.

Gender/sex Identity is in the body. How did it get there? – Ursula Hirschmann Annual Lecture by Anne Fausto-Sterling